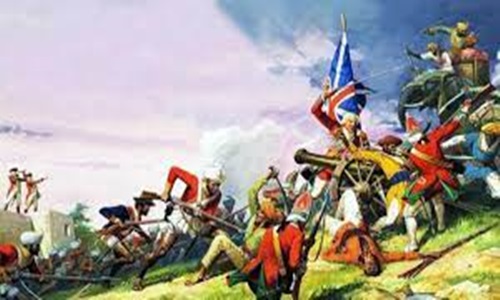 Background of Battle of Plassey

The East India Company, led by Robert Clive, fought the Battle of Plassey against the Nawab of Bengal (Siraj-Ud-Daulah) and his French Troop. The conflict took place during the late era of the Mughal Empire (called the Later Mughal Period). The Mughal emperor Alamgir II ruled the empire during the time of the Battle of Plassey. The sequence of events which led to the battle are :

Causes of Battle of Plassey

The following were the main reasons for the Battle of Plassey:

The conspiracy of Robert Clive and the subsequent betrayal by Mir Jafar, Rai Durlabh and others became the reason for the defeat of Nawab of Bengal Siraj-ud-daula in the Battle of Plassey.

Implications of Battle of Plassey

After the Battle of Plassey, there were various other battles fought, which are also important for all the aspiring IAS Officer, as a question can be asked anytime from these topics in the Civil Services Exam. Apart from the battles, one should also be aware of the chronology of the most important movements and missions led by the British to garner Indian support and expand their administration.

A wise combination of hard effort and the appropriate plan will make history preparation easier for all the aspirants. Along with Modern History, aspirants should also pay attention to Ancient History, Mediaeval History and Art & Culture to perform well in the subject.

Maximize Your Marketing Grades with the 4P Strategy

How to Write a Critical Analysis Essay Step by Step