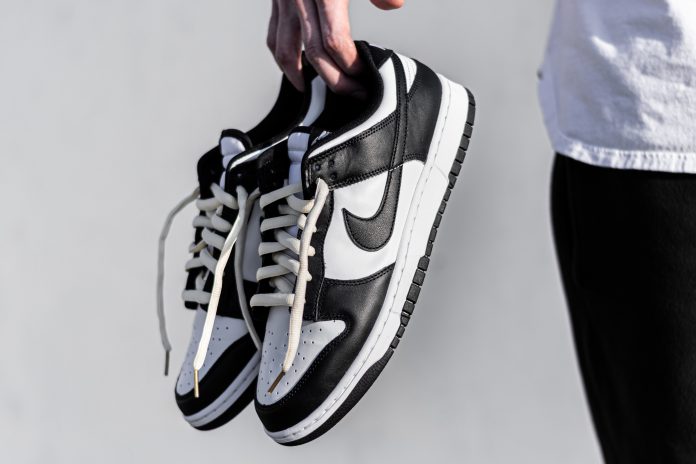 It has a long history, the Nike Dunk. Almost every sneaker subculture has adopted the Dunk since it first appeared in 1985, a period of 40 years. The Nike Dunk is a legend in various sports, including skateboarding, basketball, and dancing. Nike Dunk sneakers had a far broader impact than only its first use on the court throughout the course of almost four decades. We decided to offer you a history of the Nike Dunk because the shoe has had a renaissance during the last two years.

There is no doubt about the Nike Dunk’s significance in terms of both sneakers and culture. The Dunk has not always had it easy, despite the fact that it could be reestablishing itself in the sneaker community. We’ll now go into the sneaker’s backstory.

Get the complete scoop on the history of the Nike Dunk, from its debut in 1985 to its most recent and forthcoming releases, in this article.

The Dunk, or as it was originally known as “College Color High,” was first introduced by “Peter Moore,” the same designer who created the Nike Air Jordan 1. Both the AJ1 and the Terminator served as inspiration.

The initial 12 colorways of the shoe were all inspired by top basketball programs in America, including the University of Michigan, Iowa, Kentucky, and Georgetown. It immediately came to represent the spirit of unity, and the pack earned the moniker “True To Your School” collection.

On the front cover of their most recent EP, “Black Leather,” The Mix Crew is wearing the Dunk.

The Dunk is worn by the actors of Spike Lee’s comedy-drama “School Daze” during the movie’s well-known pajama party sequence.

Due to high demand, Nike reissued the Dunk’s original “Be True to Your School” colorways. A limited edition Iowa Dunk with “Wu W” stitched on the heel was one of the new models. Nike released exactly 36 pairs as a tribute to Enter The Wu-Tang (36 Chambers), an album by the Wu-Tang Clan, and gave them to the group’s members.

The Stüssy x Nike Dunk is Nike’s first-ever partnership with a clothing retailer. The collaboration sneaker was exclusively offered in extremely small quantities in Stüssy Chapter Stores in London, New York, Tokyo, and LA. Only 12 pairs of each color could be sold every day in each store until the supplies ran out a little over two weeks later.

With the Dunk SB Low leading its debut, Nike Skateboarding is formally established as skateboarders continue to accept the shoe. There were only four colors available for this trainer, one for each member of the team: Richard Mulder, Reese Forbes, Gino Iannucci, and Danny Supa.

Later this year, Nike will release the Supreme Dunk SB, a more upscale version of the design that draws influence from the cement texture of the Air Jordan III. People lined up around the block to obtain a pair since they were available in exceedingly small quantities.

Nike now collaborates with graffiti writer and artist Futura, following the lead of its first apparel line and first artist.

Only 150 pairs of the limited edition Dunk, created especially for New York by design legend Jeff Staple using the city’s pigeon as inspiration, were made.

Nothing But The Truth, Nike’s first-ever full-length skate film, was commissioned. Legendary skateboarders like Stefan Janoski and Paul Rodriguez give viewers a behind-the-scenes look at life on the Nike SB squad. starring a roster of A-list actors!

Nike and Supreme partner up once more to celebrate the tenth anniversary of their initial collaboration by releasing a special anniversary version of the Dunk.

Due to its widespread use on Comme des Garçons’ male catwalks, the Dunk has come to represent Haute fashion.

35 years after debuting in the basketball world, the Nike Dunk has established itself as a major cultural icon, with wearers like Rihanna, Travis Scott, and Offset.

Here are some of the most significant Nike Dunks in history:

There is no lack of inspiration

Currently, one of Nike’s most popular sub-brands is Nike SB. It is still popular in the skate and youth cultures. Over the past 20 years, Nike SB has produced some of the most recognizable and adored Nike sneakers. The distinctiveness of the Nike SB brand is attributed to its originality and audacious selections. Beer, movies, cartoons, animals, and cuisine have all served as inspiration for Nike SB models. Nike’s popular suburb has no trouble finding inspiration.